Sexual abuse involves forcing, grooming or enticing a child or young person to take part in sexual activities, whether or not the child is aware of what is happening, whether or not the child appears to be consenting. Young people whose bodies may be developed, are still not emotionally or psychologically mature enough to make informed and safe decisions about consensual  sex, and as such are vulnerable to coercion/grooming from older, more experience and worldly abusers.  Activities may involve physical contact (touching, rape, oral sex) or be non-contact (getting children to look at pornography, watch sexual activities or behave in sexually inappropriate ways). Involving children in prostitution, pornography or any kind of sex (watching or participating) is a form of sexual abuse.

Child sexual abuse happens when a child or young person is forced, or enticed, to take part in sexual activities. No matter
the level of violence, and regardless of the child’s awareness or agreement to what’s happening, it is sexual abuse – NSPCC

Signs that may give cause for concern are:

· A child that has trouble sitting or standing

· Swelling, bruises, discharge or bleeding in the genital area

Behavioral Signs of a Child Being Sexually Abused

A child suffering from sexual abuse may:

· Start to avoid being alone with a particular family member

· Try to tell you about the abuse indirectly through hints or clues. For example they may talk about being asked to keep a secret or ask anxious questions about the family being broken up or daddy taken away

· Use toys in a sexual way, or inappropriate sexual language

· Have sleeping problems, nightmares or wet the bed

· Complain about physical ailments that don’t have a medical explanation

The adults responsible or aware may:

· Seem unusually controlling and protective of the child

· Limit the child’s contact with other children and adults

· Making excuses to spend time alone with the child

Those who sexually abuse children go to great lengths to gain a child’s trust. Once abusing they will exert great pressure on a child to stop them from telling anybody else what is going on. This includes

· Telling the victim noone will believe them

· Threatening to hurt or kill the victim or his/her family

To help keep your child safe from sexual abuse the NSPCC advise several practical steps that you can take. You can:

Myths and Facts About Child Sexual Abuse From Mosac

MYTH: There is a universal, cross-cultural taboo against incest/ sexual abuse which prevents its occurrence.

FACT: 75-80% of children are abused by someone they know i.e. family members, relatives and/or close friends. Indeed, the people likely to abuse children are those who have the most opportunity and access to them.

FACT: Documented estimates of abuse vary from 1 in 23, 1 in 77 to 1 in 10 children as victims of abuse and latest studies have shown an increase in this ratio.

FACT: Incest/sexual abuse plays no favourites. Abuse crosses all socio-economic, race and class barriers. It happens in both rural and urban environments.

MYTH: Only young girls are the victims of incest/sexual abuse.

MYTH: Children are seductive. They fantasise about abuse, want it, may experience pleasure and get a payoff from its occurrence.

FACT: Children are sensual. “Seductive” is an adult’s interpretation of behaviour which is bestowed on a child. Those who are being abused sexually learn usually at a very young age that in order to get these needs met they must “put out” sexually. They begin to equate love with sex. They begin behaving in “sexual” ways to get affection. Their behaviour is often labelled seductive. If children respond to abuse, this just also means that their body is functioning normally.

MYTH: A majority of those who did not know of the abuse suffer from shock, disbelief and sometimes denial. To some it will be like finding a missing piece to a puzzle. They suffer guilt, self-blame, and/or humiliation.

MYTH: Sexual abuse is non-violent, therefore it is non-damaging.

FACT: It is not the violence but factors such as the length of relationship, the emotional distance from offender and the age of child that influence the degree of traumatisation and disruption the child will experience. What might be considered by some as a minor incident, can have a great impact on the child. Children who are abused are:

MYTH: Incest/sexual abuse is a one or two-time occurrence involving a single child.

FACT: Incest/sexual abuse typically goes on for 3.5 years prior to discovery. It is not confined to one child but usually involves children sequentially by age.

MYTH: Incest/sexual abuse is a problem of the family only.

FACT: 50% of runaway girls and boys, 70% of adolescent drug addicts and 60% of young prostitutes were the victims of sexual abuse. The social price paid is beginning to surface.

MYTH: It is better not to talk about incest/sexual abuse; the child will forget.

FACT: Adults do not talk about abuse because of their own discomfort with the topic. If you are not willing to talk about the situation the person will probably feel that you think it is something to be ashamed of, that it is dirty and just too awful to talk about. This attitude will only serve to increase guilt, shame and feelings of abnormality.

IF YOU ARE CONCERNED A CHILD IS BEING ABUSED, YOU MUST REPORT IT, AND SEEK MEDICAL ATTENTION. 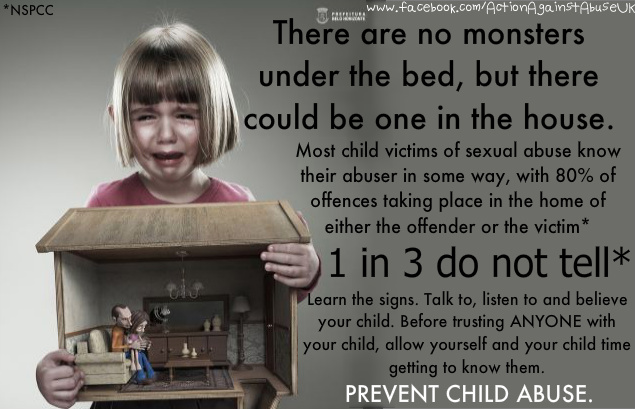 Mosac is a voluntary organisation supporting all non-abusing parents and carers whose children have been sexually abused. They provide various types of support services and information for parents, carers and professionals dealing with child sexual abuse

One in Four offers a voice to and support for males and females who have experienced sexual abuse and sexual violence. Research has consistently shown that one in four children will experience sexual abuse before the age of 18. Society has thus far been unwilling to face up to the deep rooted nature of this problem or the sheer scale of the long term damage it leaves in its wake. Their determined aim is to change this. One in Four is run for and by people who have experience of sexual abuse.

Join our community on FaceyB!

Promote your Page too

What Can I Do?