Laura Wilson was a 17 year old British girl from Rotherdam, who was known to 15 different services throughout her life.

Despite this, she was groomed  for sex, and was eventually murdered by her boyfriend Ashtiaq Asghar, 18,  after she revealed their sexual relationship to his family.

One of the most disturbing facts in this case, is that the local childrens’ safegarding board tried to hide the fact that she was known to be at risk from asian sex gangs and was groomed for sex from the age of 11 when they published the serious case review into her care.  The council also went to court to try to hide these facts, but after the full report was leaked to national newspapaer The Times, abandonned legal action.

This is very concerning for 2 reasons:

Laura, mother to Alesha (who was 4 months old when her mother was murdered), was described by her mother as;

“A fun and feisty young woman who was loved by all and had so much to live for. She doted on her daughter Alesha and had recently enrolled on a college course that she was hoping would bring her an exciting future.”

Laura had had a turbulent life.

The SCR described how Laura was placed on the Child Protection Register at the age of 11. At the same age she was diagnosed as having special educational needs and sent to a special school.

The report said she suffered bullying and developed an ability to hide problems caused by her learning difficulties.

Facts the council attempted to hide include:

At the age of 13 Laura and a friend had been given alcohol by men at a takeaway who then asked what she would give them in return.

She had been referred to a child sexual exploitation project just three months after her 11th birthday.

Another censored passage in the SCR reveals that Laura had been ‘mentioned’ during a 2009 police inquiry that eventually led to the conviction of five Pakistani men for sex offences against three underage girls.

While the published report mentioned the fact that a friend, who Laura knew when she was 10, was ‘thought to have become involved in sexual exploitation’, it concealed the succeeding passage which read: ‘with particular reference to Asian men’.

In 2007, when Laura was 13, she and her family appeared on The Jeremy Kyle Show. During the programme – about out-of-control children – her sister warned her that ‘your attitude is going to get you in big danger’.

Workers at a child sexual exploitation project later sent a report to social services, but no action was taken to remove her from what became a continuing spiral of sexual abuse.

Laura had baby Alesha when she was 16 with British Pakistani man, married Ishaq Hussain. Her boyfriend at the time was his friend Ashtiaq Asghar. 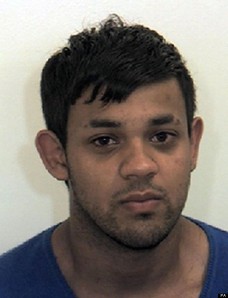 Sometime in October 2010, Laura told the families of the 2 men that she had been sleeping with them.

It is believed this is what lead to her brutal murder, which has been labbled the first british white ‘honor killing‘.

Ashtiaq Asghar repeatedly stabbed her in the head, before pushing her into a South Yorkshire Canal, where he used the point of the knife to force her head below the surface as she fought to stay alive.

Asghar was jailed December 2011 for at least 17 and a half years after he admitted murdering Laura. Lord Justice Davis, said he believed Asghar treated white girls as “sexual targets” and not like human beings, and commented on the sadistic nature of the attack, and the terrifying last moments of Lauras life.
.
The SCR pointed out a number of areas where there was lack of knowledge and understanding by professionals, including “sexual exploitation and grooming, including a better understanding of perpetrators”. It also said Laura had been invisible to authorities and;

“Few services actually saw, observed and heard [Laura] as the highly vulnerable child she was and whom society had a responsibility to protect.”

Join our community on FaceyB!

Promote your Page too

What Can I Do?